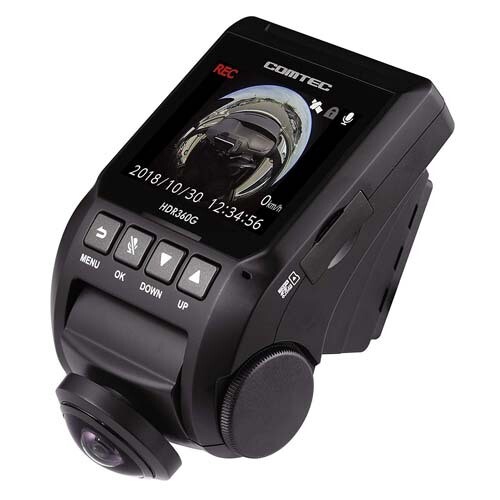 Record all directions with a 360 ° camera!
・ Records 360 ° omnidirectional directions. In addition to accidents in the front, you can also record rear-end and rear-end collisions, tilting, and width-shifting images!
・ Vertical viewing angle is 240 °, more than 180 °! Signals that were difficult to see with conventional 360 ° drive recorders are recorded well.
Front / rear split recording is also possible. In order to make it easy to check even the main body LCD, it is equipped with a 2-division recording function in which 360 ° video is arranged in half. You can check the front / side / back images without using the dedicated viewer software.

Parking monitoring function
Record 360 ° while parking! (Optional: Parking monitoring and direct wiring code [HDROP-14] required)
Monitoring continues for up to 12 hours even when the engine is off. It also detects impacts and records the images before and after.
* Even within the set operation time (30 minutes to 12 hours), if the vehicle battery voltage falls below the set voltage, the operation stops automatically and protects the vehicle battery.
* Video recorded during parking monitoring mode is recorded separately from normal data.
* Since the oldest video is automatically overwritten when the recording limit is reached, the recorded video may be overwritten depending on the settings of the main unit and the capacity of the microSDHC card.

[Reduces whiteout with WDR]
By performing image correction with the WDR function, it is resistant to overexposure, blackout, and backlighting!
* The setting cannot be turned off.

Shoot brightly at night
Equipped with 1 / 2.5 type image sensor. By enlarging the image sensor, you can record clearer images than before. In addition, by increasing the size, the brightness at night has also been increased.

Now! Never miss a moment! Three safe recording functions!
・ Continuous recording: Records images from engine ON to OFF.
* Recording time varies depending on the recording mode setting.
* In the default setting, when the recording limit is reached, the oldest video is automatically overwritten.

-Manual recording: Video can be recorded at any timing by pressing the switch.
* The file at the time the switch is pressed is recorded as manual recording data.
* In the default setting, when the recording limit is reached, the oldest video is automatically overwritten.

[Reliable function to protect the shot video!]
Backup function:
Even if the power is cut off due to an accident, the built-in super capacitor prevents damage to the file and protects the recorded video.

・ SD card check function:
Many drive recorders start up normally even if the SD card is damaged, and may not be able to record video. With this product, the microSDHC card is checked at startup, and if the card is damaged, an error is indicated on the LCD display, preventing it from being missed.

Check the viewer software for more information!
Using the dedicated viewer software recorded on the included microSDHC card, you can check the recorded data on a PC! You can check not only video and audio but also G sensor information.
In addition, because it is equipped with GPS, you can display the driving track of your vehicle on a Google map and check the driving speed.
In addition, the recorded data can be converted to a video or still image and saved to a computer.
The video shot with the round setting can be switched from the [Round], [16: 9], and [Panorama] patterns using the dedicated viewer software.
* Switching is not possible when recording with the 2-split setting.